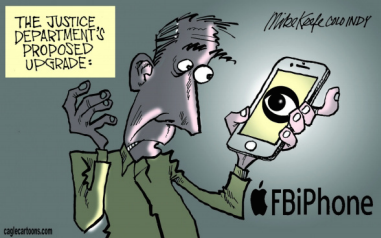 Recently, the FBI filed a court order in attempt to access and unlock the iPhone of one of the San Bernardino shooters. The FBI put pressure on Apple to dissolve the phone’s security and decrypt its information in order to get around the feature of the iPhone that allows for automatic locking. This feature can even clear a phone of its data if a passcode is entered incorrectly multiple times. Apple rightfully took a strong stand against this, issuing a public statement announcing their rejection of the FBI demand.

The FBI and other government agencies believe this issue to be simpler than it actually is. Many naively claim that this debate is just about this one device, and that Apple was withholding vital evidence that potentially could benefit the security of our country greatly. Unfortunately, there are a lot of nuances in this case that the government is either deliberately ignoring, or is just completely clueless about.

The truth is that once this “tool” is created and used to get around the iPhone’s encryption, it risks being used over and over again on different devices all around the world. Any weakness or vulnerability in the encryption software, like in this one, could be used by criminals and those with malicious intentions, as well. It could fall into the hands of terrorist organizations or enemies of the government. Apple, in their public statement, has called this “backdoor” through the phone’s security a “Master key, capable of opening hundreds of millions of locks – from restaurants and banks, to stores and homes.”

I do not believe anyone would be comfortable with such a technology reaching the wrong agent, including our own government, which has repeatedly overreached in matters of surveillance– as demonstrated by famous whistleblower Edward Snowden.

Not only is this security bypass system dangerous, but in many cases, it is probably useless. Terrorists who want encryption will always get encryption. During this debate between Apple and the FBI, sales and downloads of encrypted messaging apps have increased dramatically. Many of these products are based outside of the United States as well, further complicating the legal issues. This goes to show that a terrorist could easily exploit any possible weakening of the encryption of Apple’s software.

The FBI demand was not just oversimplified and careless, it was also destructive. Many have criticized Apple for publicizing this issue, but it should be applauded. No longer should the government be working in the shadows to weaken our access to privacy. It is important to have this debate in a public setting and ask ourselves how comfortable we are having the government, or any other agent, including enemy nations, hackers, and terrorists, possibly getting their hands on something that does not belong to them. 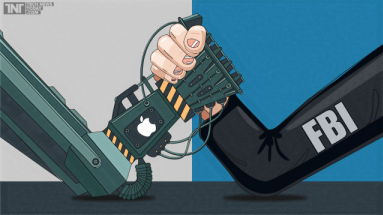 Courtesy of the Remnant

In the FBI vs. Apple case, the FBI is undoubtedly in the right. After the horrific terror attack in San Bernardino, the FBI gained access to the iPhone of deceased terrorist Syed Farook, one of the perpetrators, but were unable to enter the phone due to the passcode. The FBI asked Apple to create a temporary custom iOS, a type of operating system, for the phone, which would enable the FBI to view the information held on the device. Apple refused, as they did not want to set a “dangerous precedent” with other agencies. Without Apple’s support, the FBI was forced to find another way to access the contents of the iPhone in question. By not allowing the FBI access the contents of Farook’s phone, Apple delayed the FBI from obtaining crucial information that could help prevent future terrorist attacks. In fact, Apple is legally obligated to comply with the FBI, which was why the U.S. government was rightfully suing Apple over this issue. There is no doubt that the FBI is completely justified in its request for Apple to allow them access to Syed Farook’s iPhone 5c.

There is a clear moral high ground in this case, and it is not with Apple. As James Comey, the director of the FBI, put it, “Maybe the phone holds the clue to finding more terrorists. Maybe it doesn’t. But we can’t look the survivors in the eye, or ourselves in the mirror, if we don’t follow this lead.”

Apple, a huge technology company with access to potential terrorist activity, is blatantly refusing to play its crucial role in the war on terrorism. This was absolutely unacceptable to everyone but was especially so for the families of victims. As Robert Velasco, whose daughter, Yvette, was a victim of the San Bernardino shooting, emotionally stated, “A lot of the families of the victims-we’re kind of angry and confused as to why Apple is refusing to do this.”

Additionally, Apple is clearly violating federal laws by not helping the FBI. Under the Communications Assistance for Law Enforcement Act of 1994 (CALEA), telephone companies and Internet providers are obliged to assist with government investigations, to deal with the growing prevalence of encryption – perhaps by requiring companies to build the government to build “backdoors” for the government into secure devices and messaging apps. Additionally, under the All Writs Act, Apple must comply unless they are “so far removed from the controversy” or have an “unreasonable burden” placed on them by this request. Before the case was retracted, Apple was expected to argue that there was an unreasonable burden placed on them because it would set a “dangerous precedent” for other law enforcement units. However, that is really a small price to pay when it comes to preventing terrorist attacks and saving human lives.

Recently, the FBI managed to figure out a way to access the contents of the iPhone in question without Apple’s support, which means that other law enforcements could simply follow suit and proceed in similar situations without Apple’s assistance. This sets an even more dangerous precedent as Apple cannot even ensure the security of their devices. If Apple had simply complied, not only would the end result be the same, but they would be able to control the security of their devices.

Apple refusal to cooperate with the FBI to unlock the contents of Syed Farook’s iPhone is really despicable. The FBI may be able to save hundreds of human lives with the information stored on the phone. Additionally, Apple broke important federal laws. Apple’s actions were unacceptable.