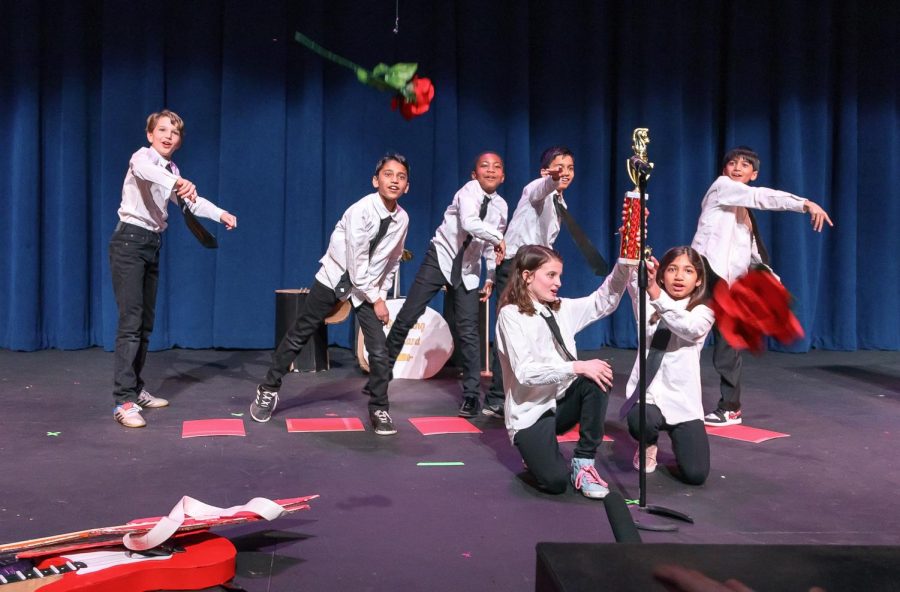 On March 4, freshmen, sophomores, and juniors all crowded the theater, buzzing with anticipation for a spring highlight: the annual 4th Grade Operetta, Battle of the Bands. Many high schoolers thought back to their own experience on that stage in 4th grade, from current juniors performing The Pushcart Wars (2013) to current sophomores and their 4th Grade’s Got Talent (2014) to the current freshmen’s Wet Side Story (2015).

According to 4th grade teacher Ms. Pelc, Battle of the Bands is “focused around eight different bands that are trying to replicate the special moment the Beatles had back in the ‘60s on the Ed Sullivan show,” in order to win a competition, created and manipulated by corporate Hollywood leaders. Eventually, however, the competition flops and it becomes clear that only a group of 4th graders could truly replicate the Beatles when the group goes viral online. Some hit songs performed include “I Wanna Hold Your Hand” by the Beatles, “Party in the USA” by Miley Cyrus, “We are the Champions” by Queen, and a mashup of “Jump” and “I Ran” by Van Halen and A Flock of Seagulls respectively.

The performance generally took significant time and effort on the part of 4th grade students and teachers alike, as 4th grade teacher and veteran operetta writer Mr. Cohen noted. “The kids are really working hard, but they’re ready, which is always nice to know before the show starts. Sometimes we don’t know they’re ready until they’re performing.” Ms. Pelc also emphasized that, “every 4th grader is looking to show off their hard work.”

Of course, as in any performance, there were challenges according to Mr. Cohen, including “feathered boas shedding, creating litter, and causing distraction,” in addition to the 4th graders taking it upon themselves to sign their names on the stage. “Sometimes the kids get bored and distracted,” remarked Mr. Cohen, “so we will have nice graffiti images from 4th graders on our stage floor for many weeks to come. The signatures became so abundant that Mr. Cohen jokingly exclaimed to the 4th grade, “Here’s a life tip: if you ever become a graffiti artist, do NOT write your own name!”

The 4th graders didn’t seem to be worried about their futures as graffiti artists though, instead expressing their excitement for throwing roses at the crowds and singing solos. One 4th grader emphasized his enthusiasm, noting that he had “never been afraid of an audience before” and wouldn’t start now. Another managed to get over her stage fright, prompting her to be “so excited that I cried last night,” presumably in a good way.

There don’t tend to be leads in these operettas, as all 4th graders do incredibly when taking on evenly distributed roles, but a few stars of the show stood out especially. Freshman Siddharth Patel noted that 4th grader Magnus Henry, “the kid that was dancing pretty well” stood out to him, a sentiment shared by junior Ella Jackson who asked, “can I adopt whoever that kid was on the far right corner?” and sophomore Sarina Hassan who said her favorite moment was when Henry “started Fortnight dancing in the corner.”

Another common remark was how on-tune and well rehearsed the 4th graders were. “I thought they were really cute and having so much fun, but they were also really good at singing, which surprised me,” said freshman Jazelle Covington. A prime moment for both 4th graders and high schoolers was at the end, when everyone sang Party in the USA together. Junior Josh Colon explained, “I was really into that part. It got me moving and up and excited.”

One of the most remarkable parts of the operetta each year, though, is the energy and enthusiasm radiating between the high school and the 4th graders. As Mr. Cohen put it, “the upper school preview has the most energy and the most love, and the kids in the audience have almost as much energy as the kids on stage.” Upper School history teacher Mr. Rhodes was in agreement, expressing that “seeing the Upper School embrace the Lower School students is a beautiful thing.”

Overall, the performance was amazing (and adorable), and definitely worth getting a tape of if you have the chance. A huge congratulations to the 4th grade teachers and students for their incredible work!