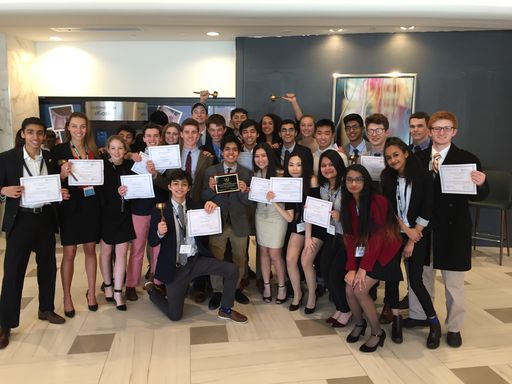 Over the past two years, the PDS Model UN team has become a national frontrunner on the high school circuit. This past year, the club competed at three conferences: RUMUN, at Rutgers University, ILMUNC, hosted by the University of Pennsylvania, and WAMUNC, at The George Washington University. Under the auspices of Secretary General Ziad Ahmed, Director General Nicole Hartley, and Under Secretary Generals Alex Neumann, Nick Jain, and Coby Gibson, the team has experienced incredible victories at all three conferences in an astonishingly short period of time. With a constantly growing team from every part of the Upper School, the PDS Model UN team has reigned as the fastest growing club at Princeton Day School.

The last conference that the team had the chance to visit was the Washington Area Model UN Conference, WAMUNC, in Washington, DC. “[WAMUNC] is a premier conference in a place we’ve never been to, and we thought our club was ready for something new,” said Jain. From Thursday night until Sunday morning, a team of 23 delegates worked tirelessly debating policies, writing resolutions, and competing to be the best delegate in their committee. Team members were spread across four different types of committees—International Bodies, Regional Bodies and Councils, Historic and Specialized Bodies, and Crisis Committees. These ranged from the basic MUN committees, such as the Political and Decolonization Committee (SPECPOL) or the Disarmament and Security Committee (DISEC), to more innovative ones such as the War Council of Ra or the Washington Metropolitan Area Transit Authority Board of Directors. In each, delegates were presented with current problems facing the world and competed to produce the most intuitive solutions possible, in an effort to attain peace and be recognized as a leader.

As any delegate can attest, Model UN is a tiring and challenging competition. Participants spend up to eight hours a day in formal debate, and most of their downtime meeting with other committee members, writing drafts, and trying to grab a few bites to eat or a few minutes to sleep in the midst. In the words of sophomore Shai Fruchter, “The hard work pays off when you go up there to get your award.” And pay off it did; this year, the Princeton Day School Model UN Team received the honor of being named Best Large Delegation at WAMUNC, the most prestigious award a school can receive from a Model UN Conference. This was a direct result of each member’s individual performance and contribution, with the majority of the members walking home with an individual award as well. When asked about the stress and excitement that comes with Model UN, Hartley joked, “It’s kind of destroyed my life, and it’s kind of been my life at the same time.”

Sadly, as the year begins to wind down, so too has the current Secretariat. But while the Spokesman sends out our highest regards to Ziad, Nicole, Nick, Alex, and Coby, we also look forward to see the direction that the new heads will usher in. Next year’s group—Secretary General Kate Bennett, Director General Rahul Bhatia, and Under Secretary Generals Emma Dries, Philip Kaplan, and Hadeel Eltayeb—are just as excited as we are for the future of the club. “I’m looking forward to seeing in what ways the team will grow, considering we have pretty big shoes to fill, but I don’t doubt that we have the capacity to continue and expand the successes we’ve had,” explained Eltayeb.